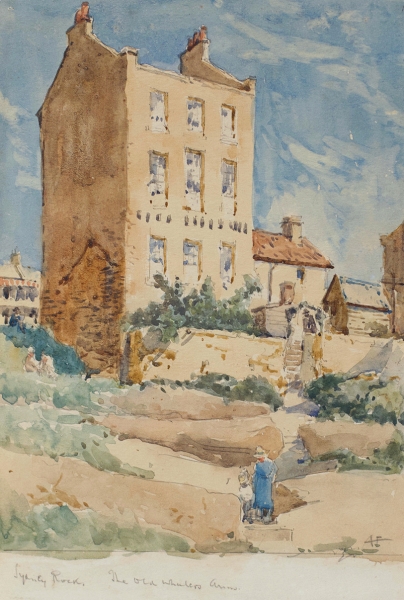 "Albert Henry Fullwood (1863-1930), artist, was born on 15 March 1863 at Erdington, Birmingham, Warwickshire, England, son of Frederick John Fullwood, jeweller, and his wife Emma, née Barr. From 15, Henry, as he was known, attended Birmingham Institute on a scholarship. On completing his studies he migrated to Sydney in 1883.

Employed first by John Sands Ltd, Fullwood worked as a black and white artist for the Picturesque Atlas of Australasia in 1883-86. He travelled extensively, including visits to Thursday Island, Torres Strait, Palmerston (Darwin), Port Moresby, New Guinea, and later New Zealand. His illustrations were workmanlike but diverged little from those of other staff artists such as Julian R. Ashton. In the 1880s he shared a studio with Frank Mahony; with Ashton they spent the weekends painting. For a time he lived with friends Tom Roberts and Arthur Streeton at their camp at Sirius Cove in Sydney. Fullwood, encouraged by Livingston Hopkins, also returned to etching. He contributed drawings to the London Graphic and Black and White as well as to the Australian Town and Country Journal, the Bulletin, Illustrated Sydney News and the Sydney Mail. In the centennial issue of the Sydney Mail (21 January 1888) he made a large wood-engraving of the city. "  For full article refer Australian Dictionary of Biography. Volume 8, (MUP), 1981 Watercolour22.5 x 16.5 cmSigned with initials and titled below the image

Etching  15 x 22 cm  Signed with initials and dated in the plate; also signed in pencil, titled and numbered 3/50