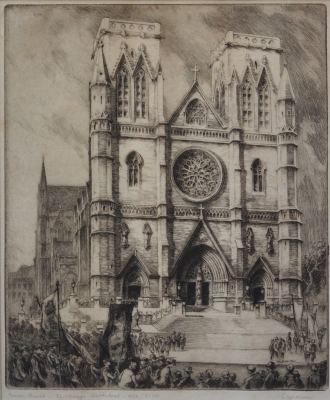 Born in London on 27 May 1879, Alfred Edward Warner, ‘Teddy’ to friends, studied
printing and commercial art at a local Polytechnic college. He learnt the techniques
of stone lithography, woodcut printing, etching, airbrush techniques and scraperboard.

He ran his own commercial studio in London before travelling to Australia with his inlawsin 1911. Finding employment opportunities difficult, he moved to Auckland, New Zealand where he was Head of Job-printing at The Star. It was at this time he made his first etchings.

Returning to Australia in about 1919, he worked as a commercial artist. Around 1922 he once more began etching and exhibiting, earning a considerable reputation for his work. In 1930 his daughter began to help in the studio preparing plates and printing, and in 1936 he was joined by his son, who printed many works. In the mid 1930s Alfred Warner and his wife travelled in a caravan around NSW, Victoria and Queensland collecting material for his Australia at Work series of prints.
In the late 1930s he produced a series of colour linocuts. Designed by Warner they were cut by his daughter and printed by his son, hence the signature, ‘The Warners’.

During the depression years Warner also produced popular etchings under the pseudonyms C. Jack, C. J. Dodd, Brueton, G. Marler and G. Martin. Some of these were printed in large editions and he also made a range of unsigned cards. Warner also produced screenprints towards the end of the 1930s, having taught himself from American magazines. He specialised in producing photographic stencils and also sold screenprinting equipment that he designed and made.

He does not seem to have made any etchings after 1938. Warner died in 1968.
Roger Butler  Senior Curator, Australia Prints, Posters and Illustrated Books,
National Gallery of Australia