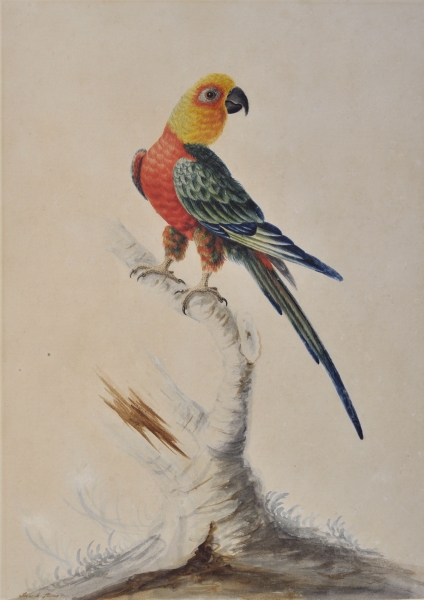 "Sarah Stone painted watercolours. She was both talented and meticulous in her observation and recording of the objects she painted. She began by painting for pleasure, but was soon commissioned to paint the contents of Sir Ashton Lever’s museum - one of the most comprehensive and extraordinary of the many collections that were being made in the wake of the new scientific discoveries in the Americas and Australasia. It was an exciting period. Zoological, botanical and ethnographical objects were being brought back to the West for the first time, and Sarah Stone was one of the first artists to paint objects from Australasia and the South Seas. She painted over a thousand watercolours of birds, mammals, fishes, insects … including many brought back from Captain Cook’s three round-the-world voyages. Her watercolour paintings form a unique record of the discoveries made by sailors and naturalists on board British survey ships and in the new colonies in the 1780s and 1790s".

"The sheer  number of species that were recorded pictorially by Sarah Stone is astonishing, and by far the largest number of her watercolour studies were of birds.  Some of these had already been described and illystrated by John Latham, whose drawings in his General Synopsis of Birds (1781-85), and scientific names in his Index Ornithologicus (1790), were frequently noted on Sarah's paintings."  Christine E. Jackson, Sarah Stone, Natural Curiosities from the New World, Merrell Holberton and The Natural History Museum, London, 1998, page 18