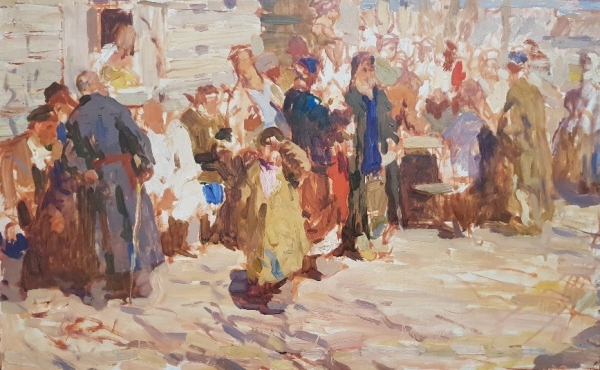 Alexander Ivanovich Sokolov was born December 1, 1918, in Aleshki village, Voronezh Province of Soviet Russia. He was a veteran of World War II, participated in the defense of the Leningrad and he had many military orders.

After graduation, his work was presented in Art Exhibitions. He painted portraits, genre scenes, landscapes, sketches from the life. He was a member of the Leningrad Union of Artists since 1950.  Master of Art-criticism (1954), a Honored Artist of the Russian Federation (1970).

Alexander Ivanovich Sokolov died on May 9, 1973, in Leningrad. His paintings reside in State Russian Museum, in Art museums and private collections in Russia, France, England, Australia, the U.S., and other countries. John Barkes, London, bought from artist's son in St. Petersburg, 1996 Literature: The Great Transformation is illustrated in A Dictionary..... Oil on board42 x 40 cmSigned and titled on reverseProvenance: John Barkes, London, bought from the artist in the artist's.....

Oil on canvas80 x 60.5 cmSigned and inscribed The Half Stole on reverse Oil on board70 x 50 cmSigned and dated versoProvenance: The artist’s widow, St Petersburg,

Oil on board70 x 50 cmSigned and titled on reverseProvenance: Family of the artist