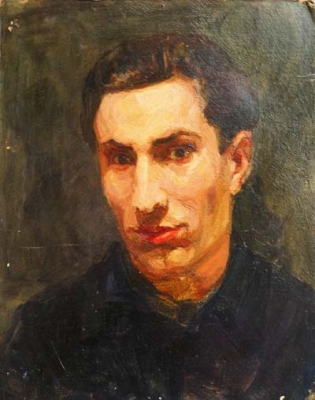 Born in Vladikavkoz, Osetia. Displayed a great talent as a boy, was sent to the art college next to the Repin Academy at 15 years of age. At 20 he graduated to the Academy where he spent 6 years.  First exhibited in 1956.  His work is represented in the Russian Museum

In 1955 he went to Leningrad and entered at the painting department of the Leningrad Institute of Painting, Sculpture and Architecture named after Ilya Repin, where he was a student of Boris Ugarov, Andrei Mylnikov, Nikita Medovikov and Vladislav Anisovich.

In 1961 Otiev graduated from the Leningrad Institute of Painting, Sculpture and Architecture in Victor Oreshnikov's workshop. His graduation work was genre painting named "A Herdsman".[2]

Since 1950, Otiev participated in art exhibitions. He painted landscapes, portraits, genre paintings, scenes with horses, sketches from the life. One of the leading themes of his art – a equestrian sport. His personal exhibition was in Leningrad in 1980. Otiev was a member of the Saint Petersburg Union of Artists (before 1992 – the Leningrad branch of Union of Artists of Russian Federation) since 1967.

Otiev died on June 7, 1999, in Saint Petersburg. Paintings by Otiev reside in art museums and private collections in Russia, France, England, the United States, Japan, Italy, and other countries. Oil on card12 x 16.5 cmSigned and dated on reverse Provenance: John Barkes, London, bought from the artist in his..... Oil on panel 32.3 x 22.7 cmSigned and dated Provenance: John Barkes, London, bought from the artist in the artist's.....

Oil on board48 x 33 cm The painter Oleg Lomakin painted this same pose. The young woman either became Otiev’s .....